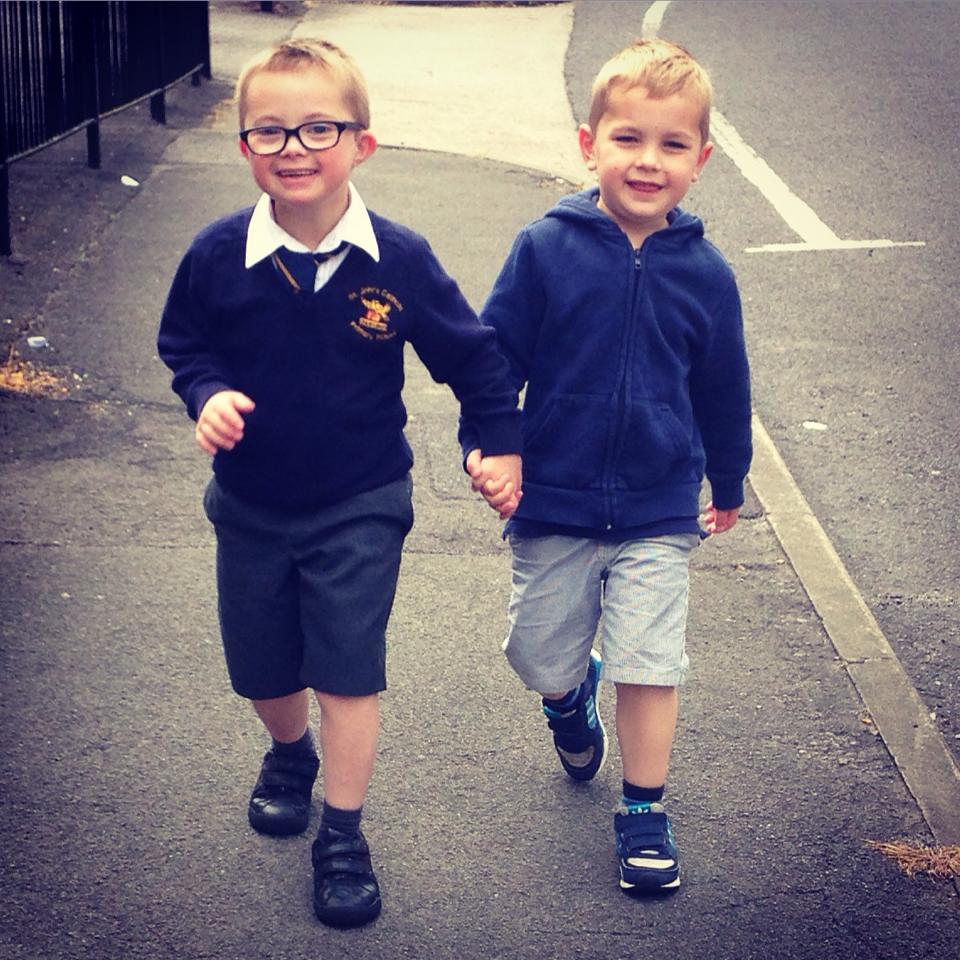 So often we talk about “balance”. “I am pro-choice, as long as decisions are based on “balanced” information”. Giving the WHOLE picture. Except, more often than not, us parents of children with Downs syndrome really just want to counter balance the harsh scientific and medical facts reeled off by some medical professionals with some of the wonder and joy and fulfillment our kids with Downs syndrome bring us.

So here, you want balance? I will give you some balance.

I have had a shocker of a week. I want to use a different word beginning with “sh” to be honest, but have decided to keep it clean. I feel like I started the week off as a lovely juicy lemon and someone (Seb) has unwittingly placed me in a juicer and squeezed every single zingy, drop of life and zest out of me.

Seb has a tendency to run off. He lives in the here and now. He doesn’t think through consequence. Ironically, it is one of the loveliest things about him. I love that he doesn’t worry too much about the future, or indeed the next few minutes. I love that he makes the most out of every immediate moment and opportunity. I love that he acts on impulse.

But I hate it so much too.

On Monday, we drove to school. Whilst I was collecting his younger siblings and the fifty thousand million bookbags, water bottles, show and tells, football kits and blah blah out of the car, Seb decided to make a jailbreak. He undid his seatbelt and bolted out of the starting blocks. leaving the rest of us for dust.

The car was parked some considerable distance from the playground entrance and I was stumped as to what to do. It was almost one of those “which kids do you love the most?” moments. Do I run after Seb or stay with his siblings?

I ran after Seb, but not as fast as his pace so I could maintain a middle ground where I could keep watch on the others whilst gaining ground. We finally reached the playground, where I was sure he had headed to. But….he wasn’t there. He wasn’t there.

Panic and fear set in, all the while trying to keep it together somewhat in the playground in front of the other kids, their parents and my own kids.

On this occasion, Seb had chosen to enter school through the front reception, rather than usual route via the playground. He was safe. He was joking around, hands in his pockets, not a care, with some members of staff, all charmed by his presence and oblivious to the whirlwind carnage he had left in his wake. I spoke to him, took him to his class and then I breathed a sigh of relief that he had been dropped off safely and was now in the confines of a soon-to-be-locked up school with one to one support.

Yesterday, we walked to school. I like us to walk to school whenever possible. It is my favourite time of year too. Bright blue skies and crisp, fresh air. I think it is good for the kids to get a lungful before they settle down into their chairs.

We were all zipped up in our coats and ready to go. As we were leaving, I realised the heating had gone off and as I was home that day I shot up the stairs to put it back on. I returned to a panicked face and Dominic yelling and pointing “he’s gone! He’s gone! He’s run up the road!!”

More of the same fear ensued. He wasn’t even on our road anymore he had turned the corner. At the top of my lungs I yelled “SEB!!!STOP! STOP!” but as someone who takes visual cues, and someone who was enjoying a flight of freedom, my yells fell literally on deaf ears. By some miracle he stopped at the kerb. And waited.

We recovered, regrouped and turned up to school bright and breezy with a brave face. (That’s after we all waited for five minutes whilst he stroked and chatted to a cat he saw on a wall).

And that brings me to today. After a little chat last night and this morning about running off, we had a clockwork drop off. He went into class perfectly, he sat down and got his reading book out. I dared to breathe as I spoke to his TA. Then just as my guard was dropping, suddenly he took a bid for freedom. He legged it out of his class, borrowed a scooter from the scooter park and whizzed off as fast as he could across the playground.

He took some persuading (and chasing) to come back in, but we got there. Seb’s siblings, just standing there used to the drill.

So today I feel exhausted. Mentally and physically. I feel wrung out. Every morning my tummy flips with anxiety. Will we make it today? Will our luck run out and he will fall or step out in front of a speeding vehicle? Will he chase his friends in their car as they wave from the window? Will he run off so fast we will lose him forever?

So there you have it, some balance. It’s not all wonderful and enriching and fulfilling. It’s not all getting certificates at football or writing a first sentence or being invited to a birthday party.

But here’s the balance. This is a small challenge that Seb and I face, and is undoubtedly as a result of him having Down’s. It makes life hard work. It means I can never, ever, ever fully relax when we are out. I cannot take my eyes off the ball for one nano second. The way Down’s syndrome affects Seb’s thought process makes every day unpredictable and we are always second guessing his next move. It makes trips out sometimes stressful, especially large crowds or spaces. It impacts on me as a person, I am stressed and highly anxious and strung. It impacts on his siblings as they see me stressed and highly anxious. And it means that trips out are sometimes cut short or end in turmoil.

No way. Never. A resounding NO.

Seb is one of the best things that has ever happened to me. One of three to be exact. Unquestionably. His beautiful beaming face and sparkling, trusting blue eyes will come bouncing out of school this afternoon, completely unaware of the deep anxiety and knots in my stomach he often causes me. He will greet me with his usual “Hi Mum!” and, almost embarrassed, he will look at the floor with a half smile and then immediately take his rucksack off his back, dump it at my feet with his coat, and run off to play football with his mates who will cheer when he whacks the ball into the goal. His TA will (most of the time!) tell me they’ve had another “super afternoon” and talk me through how hard he worked or some other anecdote from the day.

It’s hard to believe I once considered his diagnosis the worse thing that happened to me. I wouldn’t change a single thing x